GET H2: New alliance aims to create the basis of a European infrastructure for green hydrogen 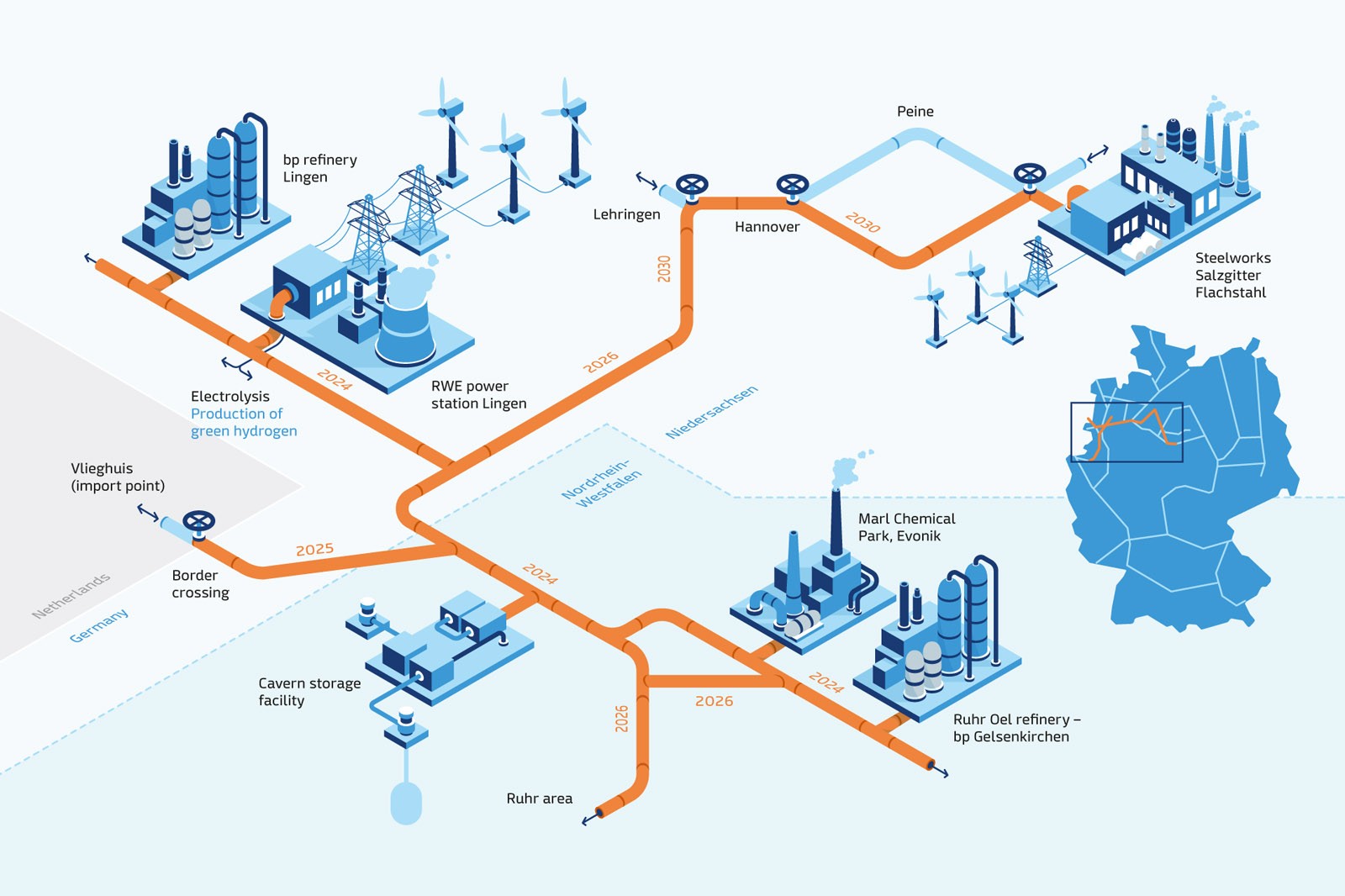 Seven companies from the GET H2 initiative show how rapidly the planning of the national and European hydrogen economy is developing. The consortium wants to build a cross-border infrastructure for hydrogen - from the production of green hydrogen to transport and industrial use. From Lingen (Emsland) to Gelsenkirchen and from the Dutch border to Salzgitter, production, transport, storage and industrial acceptance of green hydrogen are to be connected in several steps between 2024 and 2030 under the umbrella of the overall project.

For this project, the companies bp, Evonik, Nowega, OGE, RWE, Salzgitter Flachstahl and Thyssengas, all partners in the GET H2 hydrogen initiative, have now submitted an expression of interest for funding under the IPCEI programme (Important Project of Common European Interest) to the Federal Ministry of Economics and Technology. By using green hydrogen in refineries, in steel production and for other industrial uses, the overall project outlined here should be able to avoid CO2 emissions of up to 16 million tonnes by 2030.

The project at a glance:
In Lingen (Emsland) RWE produces green hydrogen via an electrolysis plant. From 2024 this will be used to supply the bp refinery in Gelsenkirchen. Most of the transport will take place via existing gas grid lines (shown in orange), which will be converted to hydrogen transport. In 2025, it is planned to extend the network to the Dutch border, and in 2026 RWE will integrate a cavern storage facility in Gronau-Epe. By 2030, the network is to be extended to the Salzgitter steelworks and, if necessary, connected to other networks (shown in light blue).

Collectively, the overall project can map the essential building blocks of the green hydrogen value chain and form the basis for an efficient European gas infrastructure for hydrogen. With the integration of a cavern storage facility by RWE in Gronau-Epe, the system, which is based on electricity generation from wind energy, can also make a contribution to supply security. The link to the Dutch gas market lays the foundation for a trans-European hydrogen market. The expansion of the project by partners from the transport sector and for the distribution of green hydrogen in the area is also already in preparation. Other partners from the GET H2 initiative have also submitted expressions of interest for IPCEI funding for projects aimed at building a hydrogen infrastructure.

The companies want to push ahead with the development of a hydrogen economy. However, these plans can only be implemented with the necessary regulatory framework. The current focus is on the amendment of the Energy Industry Act (EnWG). The companies are convinced that the draft passed by the Federal Cabinet at the beginning of February does not go far enough. It does not provide for an overarching regulation of gas and hydrogen networks with a uniform gas and hydrogen network fee. However, this would be the best solution to enable a uniform and non-discriminatory use of the hydrogen infrastructure at sustainable conditions. The IPCEI programme can finance the network construction in part. However, the financing of network operation requires a long-term solution to the charging issue in the EnWG.

Further political steps are also necessary to create incentives for the use of green hydrogen in industry. The national implementation of the EU Renewable Energy Directive 2 (RED 2), which was approved by the federal cabinet at the end of December, is an important step towards making the rapid use of green hydrogen economically viable for refineries through corresponding demand in the transport sector. The definition of the electricity purchase criteria is still outstanding here. The criteria for the levy exemption of green electricity used in electrolysis, which was decided in December as part of the amendment to the Renewable Energy Sources Act, also still need to be worked out. For the steel industry, a different subsidy path is necessary, as RED 2 does not apply here. Corresponding support models such as so-called Carbon Contracts for Difference (CCfD), which favour the use of CO2-free or low-CO2 steel, have been announced in the German government's hydrogen strategy, but legal implementation is still pending.

GET H2: New alliance aims to create the basis of a European infrastructure for green hydrogen